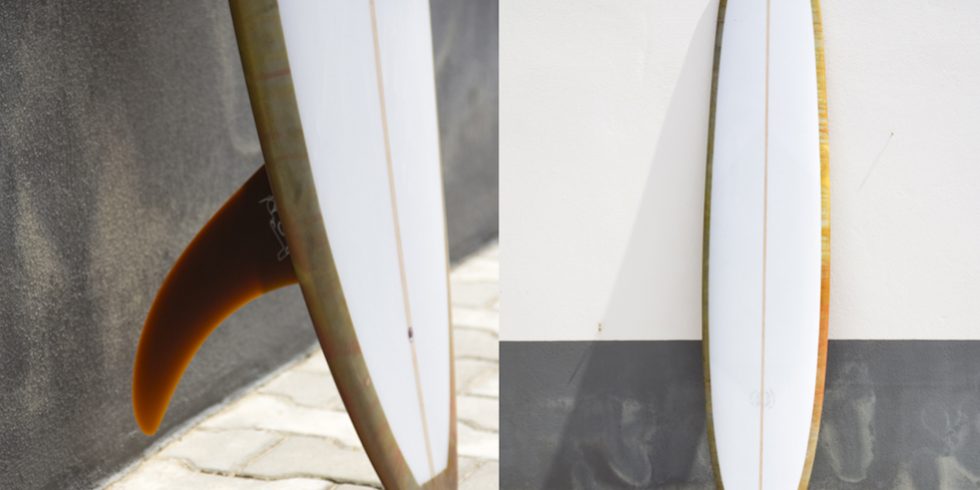 A View of Retro Surfboards and Alternative Surfing

Surfing’s rich heritage sprouts out of the sheer yet inscrutable act of riding waves. That we now pull aerials, sketch blueprints of artificial beaches for swells to roll into, and use all sorts of materials to develop the most efficient wave-riding crafts is but a by-product of our urge to explore all gamuts of this experience of gliding on the sea.

Throughout the 1960s, the idea of “total involvement surfing” characterised an ongoing urge many surfers had to turn sharper, glide faster, and reach previously unreachable parts of the wave. Such thirst for radicality led to restless experimentations in the shaping bay, which resulted in a series of iconic designs, namely Nat Young’s Magic Sam (1966), Bob McTavish’s Plastic Machine (1967), culminating with Dick Brewer’s mini-gun (1967) and the beginning of the Shortboard Revolution.

Follow-up models, such as Steve Lis’ Fish (1972), the Campbell brother’s bonzer (1972), Ben Aipa’s stinger (1974), and later Mark Richard’s twin-fin (1977), continued to delve into the benefits of this sudden shift from over-9 feet in height and 25 pounds in weight to sub-7 feet and 10 pounds. Each design had its idiosyncrasies. Yet they hardly diverged from the standard single- and double-fin configuration and, to a certain extent, always fell short of some performance aspect – at least until Simon Anderson’s thruster appeared in 1981.

Beyond design innovation, this period moulded the conception of high-performance surfing. It propelled radical shifts in technique and style whilst also shaking the foundations of what it meant to surf and to be a surfer, thus re-configuring the industry and culture altogether. In hindsight, it could be said that the infatuation over performance drove many surfers and shapers to lose sight of what the very word “performance” meant for them. Surfing became more quantitative, more objective, and its kernel – riding waves – was now shelled with by pigeonholes and expectations. But maybe that’s just the way things go.

“Surfboards are very tactile objects and the old short boards hark from an era where there was great experimentation, passion, and even love encased and sealed forever in fibreglass. I have always felt you could feel if a board would work by holding it in your hands and placing it under the arm. I started seeking out old boards from sale racks, people’s garages and the reject rooms of old shape shops. These unwanted gems always had me leaving the water with a smile from ear to ear. There was a beauty before about stumbling across a random old board. It was hard to find a shaper to replicate a 30-year-old board so anything I found I decided I would just learn to surf – good or bad. A great experiment.

At the time those boards were made, surfboard design was moving so fast that many concepts were touched upon but not always fully developed and understood. Today shapers are revisiting these ideas and applying modern knowledge and techniques; adapting these designs. It’s an exciting time. Each good shape has its magic conditions in which it excels. And for me this keeps it fresh, trying to feel the glide and slide of each setup, approaching wave riding with changing mindset and drawing alternative lines on the wave face. My lines. Not the lines someone else tells me I should take. Just the lines that give me that ear to ear grin that’s so special.”

As a backlash of the Shortboard Revolution, high-performance thrusters emerged in the early 80s, broadening the spectrum upon which surfers could travel on a wave. It may have seemed that surfboard design had finally managed to minimise performance limitations enough. Every nook and cranny of the wave became accessible. Deeper barrels. Aerials. Sharp turns and late take-offs. The thruster took the best of single- and twin-fins and wad it into a single design, providing a compounded effort of stability, speed, and manoeuvrability. Such holistic setup made the thruster set in with pandemic speed and strength, overshadowing most singles and twins. Yet, this particular type of board favoured a particular type of audience (mainly those with a refined technique and lots of experience), leaving the vast majority of surfers baffled and frustrated for not being able to tame the design, so to speak, and further instilling a mentality that “if you can’t tame the design you’re not surfing well.”

“In my opinion, most people think that for surfing to be high performance it has to be done in a thruster. But in the 60s and 70s, there were surfers doing “high performance” manoeuvrers and surfing incredible waves with much heavier, longer, and rudimentary boards compared to what we have on offer today. Surfing with different types of boards only expands the possibilities, not only in terms of discovering new lines on the wave but also to develop a style of your own, making any board, however simple or strange, work. Surfing becomes less about the quality of the wave and more about the surfer.”

One of the first responses to this preconception ensued from Dave Parmenter’s Stub Vector –  a flatter, wider, and much more user-friendly surfboard model than the standard thruster. The Stub may not have allowed for the most radical kind of surfing – but it made it easier to catch waves, cruise down the line, and turn smoothly, which is what the majority of non-expert surfers could expect. By going against the narrow-thin trend, it also shone a light on the fact that this high-performance mentality didn’t have to be – and wasn’t – the only way to ride waves and that surfers should try out different crafts other than those advertised in the world of competition in order to enrich their surfing experience.

Following Parmenter’s ism, a movement emerged in the late 1990s, calling forth a “retrospective” of surfing for what it was before the Shortboard Revolution and the thruster. Joel Tudor, Alex Knost, and Rob Machado were some of the names to pioneered the “retro movement”, followed by the Malloy brothers, Stephanie Gilmore, Ellis Ericson, etc. By re-introducing single-fin designs from the 60s and twin-fin fish adaptations from the 70s, not only did these surfers begin to exteriorise an ongoing general desideratum to approach surfing from an alternative angle, but also highlighted Parmenter’s idea that surfing didn’t have to be all about who is scoring the highest. Consequently, this broadened the concept of high-performance from judging the number and power of turns to considering the cleanliness and style of the ride – an outlook that is nowadays translated into alternative formats of competitions such as that of the Vans Duct Tape.

“For over two decades, I dedicated most of my surfing time to riding shortboards, but then my state of mind began to change. I decided it was time to take more risk and, through the knowledge I have of surfing, evolve my style. So the return to the retro surfboards happened naturally; to me they are art and represent a lifestyle.

Nowadays, I surf with boards whose designs are adapted from those used in the 60s and 70s; greater volume and an outline that allow more speed and less effort. I use the power of the sea and my understanding of the wave more than the strength of my feet – I’d rather be in flow with natural energies instead of carving turns and trying to create as much spray as possible. I believe that the kind of smooth, stylish surfing I and others do on alternative boards is what many surfers can relate to rather than what the “elite athletes” are doing at ‘CT events – the majority of people relate less to the performance and more to the experience.

The mid-length is the most versatile board in my quiver and I can almost always find a wave for it – when I take it out, it sings. As I get older, I am getting pickier about the waves I ride and mid-lengths satisfy most of my need because they are super adaptable. And in surfing, more adaptable means more fun. So I think that minimizing expectations, valuing fun, and enjoying my time in the sea in as best as possible is my goal from now on.”

Ever since the 70s, when the Shortboard Revolution was on the wane, there had always been a counterculture preaching for the so-called soul surfing as an alternative to the commercialised and industrialised side of the sport. But as of the 2000s, it was like a stigma had finally been broken. Although most shortboard surfers didn’t just get rid of their high-performance tri-fins, many chose to embrace this shift in mentality and expand their quiver, and an increasing number of surfers began to tap into the seemingly forgotten potentials of these “retro” crafts. For many, this was a process of reconnection with the groovy side of surfing, of reassessing the very essence of what it meant to be a surfer. Still, these designs and the philosophies often attached to them never really vanished – they lulled. The noesis that surfing is a form of self-exploration has always been there.

Our favourite places around Europe to Hang Five

Mahalo x Aloha | The words that shape our business